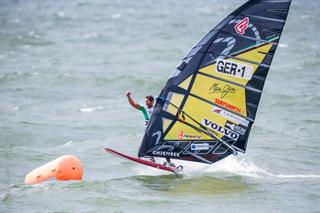 After five days the Volvo Surf Cup on Sylt (Germany) came to an end. A total of over 120,000 spectators experienced spectacular races at the IFCA Slalom World Championship 2015. With over 90 competitors from 17 different nations a new participation record was set.

The German Vincent Langer (GER-1) succeeded to win the official World Championship title in his home country.  Already in the first slalom elimination the reigning German Champion laid the basement for his success when he dominated the opening race. Langer was also able to win the second elimination. With this perfect start into the regatta the German achieved a huge lead. The result of the third slalom elimination was irrelevant for him. But with an eighth place he presented a strong performance again. After three eliminations every competitor may discard his worst result.  With two bullets Langer ensures the optimum score of 1.4 points. Therefore he rightfully wins the official IFCA Slalom World Championship title 2015.

“I am stoked! I am the Slalom World Champion!” smiles the fresh title holder to continue “Last year I was third. The year before Vice-World Champion. Now, in the third attempt it has finally worked out. I am even more proud to achieve this success in my home country. This is the maximum!”

On the second place follows the Dane Sebastian Kornum (DEN-24). Kornum presented a consistent performance. The Dane entered the World Championship with a third place. In the second elimination he confirmed his ambitions for a top result. In the final elimination Kornum was able to dominate. With his victory Kornum was able to ensure the Vice-World Championship title with 37 points.

“I am happy to be Vice-World Champion. Normally it is already a kind of defeat if you are second. But Vincent really deserves the title. He has presented a great performance on the water and is promoting windsurfing a lot among the youth in Germany.  If somebody is a rightful champion then him!” smiles the sympathic Dane Kornum.

Nicolas Warembourg (FRA-531) from France follows close behind with 4.0 points.  In two races he conquered the second place. Once he got sixth.

“I had hard fights with Vincent Langer and Sebastian Kornum. My target was a podium finish. And this is what I was able to achieve. Therefore I am very happy about my result at the IFCA Slalom World Championship on Sylt,” says the French Waremburg.

The Volvo Surf Cup on Sylt was again a huge success. 120,000 spectators experienced the Sylt from its windy and sporty side. A new participation record was set to confirm the high status of the event on the international level. 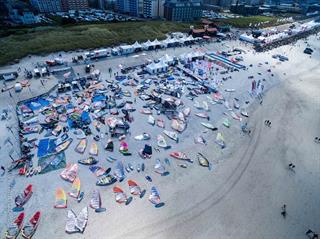 No racing on the fourth day as unstable winds and teasing forecasts caused continuous postponements until late in the afternoon. A storm warning put an end to all prospects of any beach activities.  Thus wind and waves greeted competitors on the last competition day here at the Volvo Surf Cup 2015 IFCA Slalom World Championship following the storm.  Perfect conditions for the National Wave event running for the German wave competitors but no good for slalom!By the 12 o’ clock announcement it was certain that there would be no more racing for the IFCA Slalom Worlds with the last possible start being at 13:00 hours.

And so Vincent Langer, GER-1, claims the title of 2015 IFCA Slalom World Champion for the Men and Lena Erdil, TUR-33, is victorious in the Women, unbeaten and with a perfect score.  Maria Andres, ESP-2 took a well-deserved second and is possibly relieved that she has been able to rest her back since spending a night in the local hospital.  Esther de Geus, NED-16 took advantage of her absence in rounds 6 and 7 with two second places which secured her the third position on the podium.

Sebastian Kornum DEN-24, after a nerve-wracking couple of days, just scraped second place on the men’s podium, a mere point 3 ahead of Nicolas Warembourg FRA-531 finishing in third place.

Overall competitors report that it has been “awesome to be here on Sylt”, conditions are tough, especially if you are more used to flat water and like a little bit more wind, but a great place for the competition.  Everyone involved in organising the event has done a great job!

Day 4 The Silence before the storm
Words from Sebastien Kornum and Lena Erdil at the Volvo Surf Cup | 2015 IFCA Slalom Worlds Championships.

No wind on Day 3, So we took time to catch up with a few competitors to discuss about their event experience.

Day 1 “The Official Kick Off” for IFCA Slalom Worlds 2015