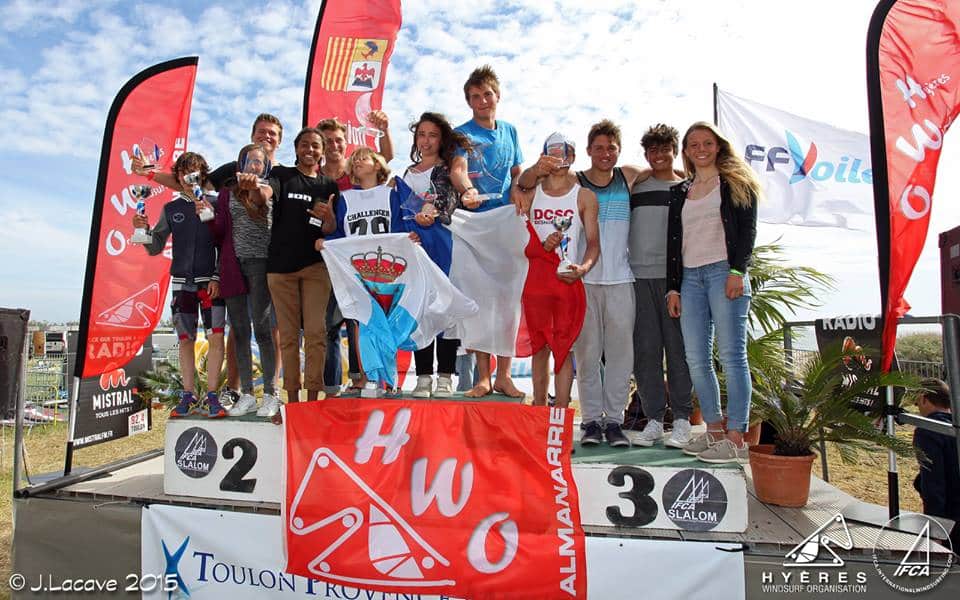 The Final Day at the 2015 IFCA JUNIOR, YOUTH & MASTERS SLALOM EUROPEAN CHAMPIONSHIPS here in Hyeres, Almanarre Plage ended with 5 full eliminations in the women, juniors, youths and masters divisions completed for the championship titles.
The start of the day implied it would be a relaxing Sunday for the competitors but by midday the wind was picking up.  With 9 to 15 knots and the course area ready to go the Juniors were up first for Elimination #6 (“if the wind stays stable enough”).  4 heats were successfully completed in light winds and then the youths also completed 4 heats.  It was very interesting sailing, as the water was super flat and the winds off shore.
The AP flag was raised as the course area needed to be adjusted before the Masters could start their heats, but with wind readings stubbornly hovering around 7 knots at the start boat it was decided to end the championship with 5 full eliminations in all divisions.
The awards ceremony took place at 16:00hrs.
Congratulations to all Competitors and the Winners and last but not least the entire event crew for delivering such a great championship. 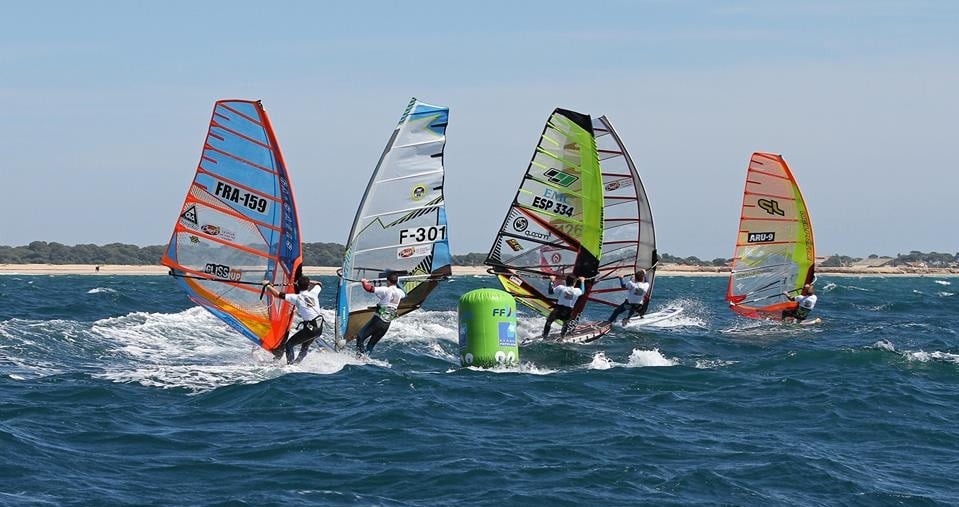 The fourth competition day started early with the skippers meeting at 9am. Yesterday’s relaxation caused for an exciting morning as the sun was out and the vibes for good winds were positive.  However the wind came through a bit later and smoothly with wind readings between 10 and 14 knots after the skippers meeting.
The Masters completed their first round of elimination 4 and the following divisions Juniors, Youths and Masters could continue with the qualification rounds 5 and 6.
Conditions were good with increasing winds gusting up to 20 knots.

The wind became tricky at the beginning of elimination 5, the race committee decided to put the AP flag up so riders could go back to the beach, to change gear and wait for better winds.  The wind returned a little and the race committee pushed on forward to continue racing as the forecast looked even worse for the afternoon.
Females:  FRA-312 Marie-Eugenie Simonet still in the lead and others such as FRA-582 Lisa Godon and FRA-425 Dora Bijvoet showed great skills in today’s racing day. Juniors:  ITA-353 Francesco Scagliola with an OCS and out of the finals in elimination 4 while FRA-888 Jimmy Thieme simply dominated the juniors division with his friend FRA-820 Benjamin Adjihou right behind him. Today NED-2 Jakob Kooij got his pace together and kept a good performance throughout the day. The battle for second went to FRA-820 Benjamin Adjihou who played a  consistent game vs the Italian ITA-353 Francesco Scagliola. Youths:  Better performances for SLO-9 Jan Kosmina, NED-262 Coen Swijnenburg and FRA-848 Damien Arnoux. FRA-498 Basile Jacquin had a great day with a second place in the 4th elimination but could not keep his performance up in elimination 5 leaving him stuck in fouth position. FRA-848 Damien Arnoux made a great come back after a poor performance in elimination 4.  Great starts and technical sailing were to cause for his second place finish in elimination 5 and with 2 discards he earned a well deserved second position after 5 eliminaions. FRA-465 Nicolas Goyard was simply one of the best out there, this French kid is just too fast over the course with great starts and great jibes. Masters:  In elimination 4 we saw TUR-611 Erkan Morgan performing at his best with a second position in the finals to upgrade his overall ranking to a second position. Not bad at all for the heavy weight Master. FRA-316 Rabetaud Gilles had a great day but not quite enough even with the 2 discards.  AUT-30 Markus Poltenstein had a few mistakes here and there including a huge crash but with 2 discards he is now in second position and definitely feels happy about that.  ESP-0 Alejandro Alcazar Rodriguez a great competitor who got 2 bullets today, kept his position as the overall number 1 in the masters division. Today was an exciting day for the 2015 IFCA JUNIOR, YOUTH & MASTERS SLALOM EUROPEAN CHAMPIONSHIPS here in Hyeres, Almanarre Plage. The forecast for tomorrow looks a bit light, but you never know with these thermal winds, guess we all will have to wait and see.  Tomorrow the first skippers meeting of day 5 is scheduled at 10am with the first start at 11am

The third competition day started with very grey skies and like every day with the skippers meeting at 10am. Yesterday’s elimination 4 is still not completed. The Youths, Juniors and Masters sailed the first 4 heats except the Masters division made it just to heat 3 as heat 4 got cancelled due to too light winds at the end of day 2.
The wind is expected to return early tomorrow morning, competitors are excited and look forward to some more slalom action and another elimination to profit from another discard to be given after the 5th elimination.
From tomorrow onwards the top 3 competitors in each division will compete with a coloured Lycra in the following colours: yellow for the first position, blue for the second position and red for the third position. 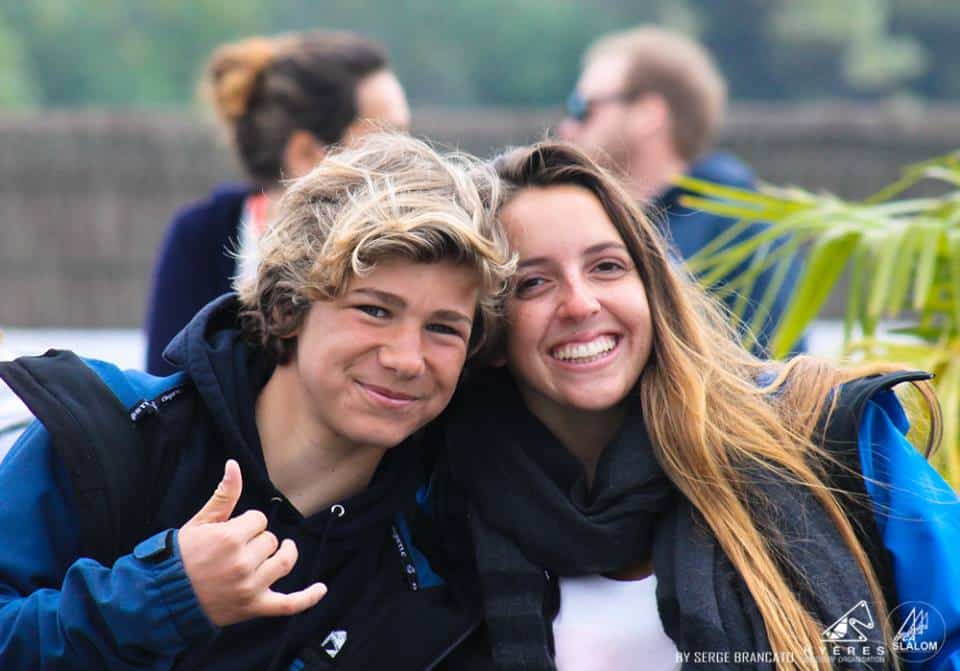 Today was a relaxing day for the 2015 IFCA Junior, Youth and Masters Slalom European Championships here in Hyeres, Almanarre Plage. Tomorrow the first skippers meeting of the first racing day is scheduled at 9am with the first start at 9:30. 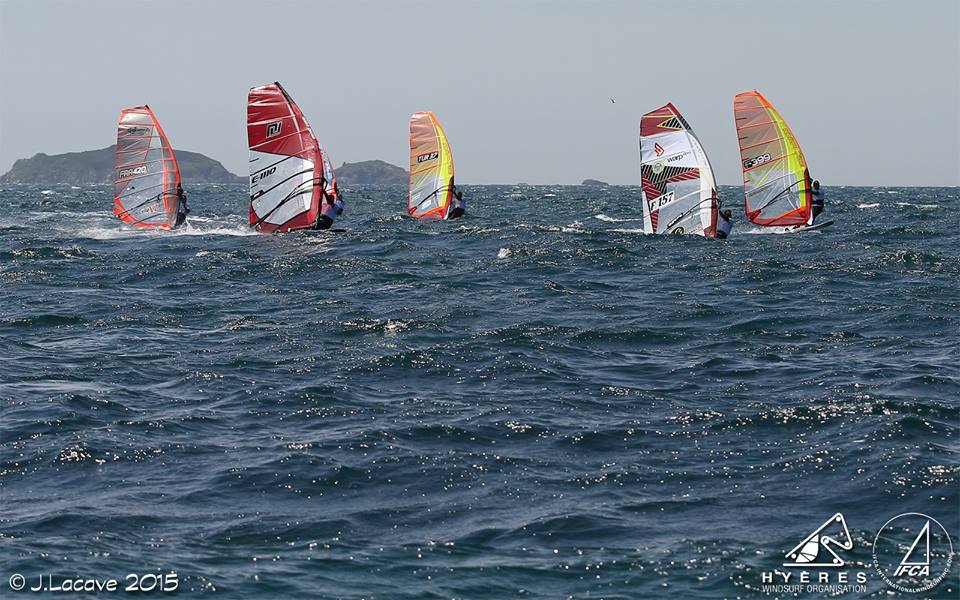 The second competition day started just like the day before, smooth with the first skippers meeting at 10am. A few protests from the previous day were being evaluated and one of them was the start of Nicolas Goyard (with video footage) during the semi finals in elimination 2.  He got a redress and scored a slot in the youth finals.
The thermal winds arrived earlier then expected and the final rounds of elimination 2 could finally continue for all divisions in winds from 16 to 18 knots.
Elimination 3 started right after the lunch break with great conditions for slalom racing.  FRA-465 Nicolas Goyard dominated the Youth devision with clear starts and great board speed in both eliminations.
FRA-888 Jimmy Thieme had a great day and beat yesterday’s elimination 1 winner FRA-820 Benjamin Adjihou.  Not so far behind we have the talented Italian kido ITA-353 Francesco Scagliola with his great jibes.
A happy day for AUT-30 Markus Poltenstein who showed a consistent performance in both eliminations. ESP-0 Alejandro Alcazar Rodriguez did not manage to perform like the day before but managed to stay close to the first position and is definitely one of the strong ones among the masters.

The day continued with decreasing winds from 20 to 14 knots and elimination 4 started in the late afternoon until the wind dropped down to below the limit which is 11 knots for slalom racing.
Tomorrow the first skippers meeting of the first racing day is scheduled at 10am.
After the unfinished elimination 4 we spoke to some of the division leaders after 3 eliminations. 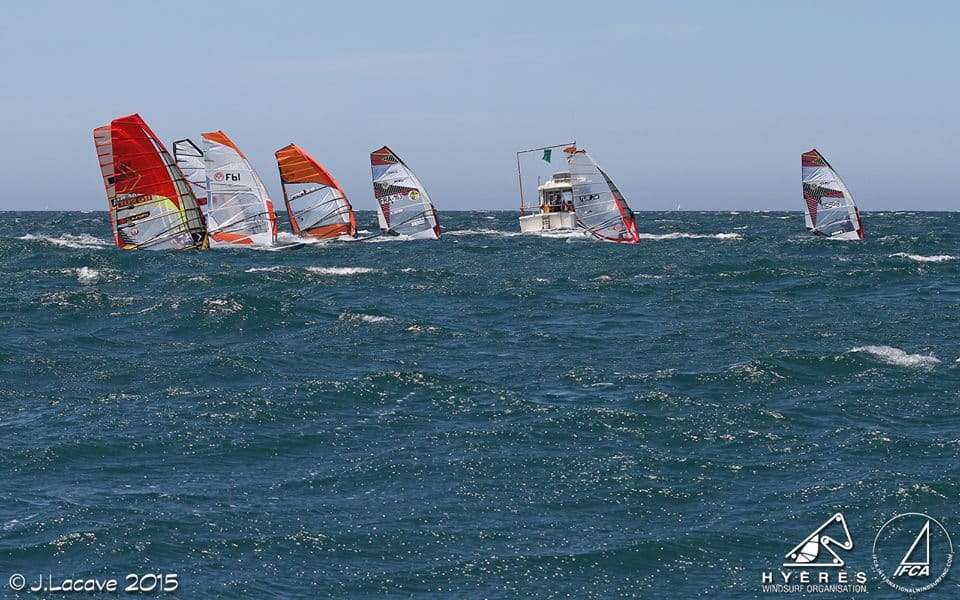 The first competition day started very smoothly with the first skippers meeting at 10am.
Shortly after mid day the thermal winds slowly started to build up with winds from 11 to 16 knots.
The day continued with increasing winds up to 22knots in the gusts.

Elimination 1 was completed with the following highlights:
Juniors: A new kid on the block from France, Benjamin Adjihou, came from nowhere surprising all of us with his solid performance in the juniors category, a kid to keep an eye on in the next coming days.

Youths: Nicolas Goyard from France the defending World Champion showed impressive skills by leading every heat he sailed, Damien Arnoux who has the most experience on the waters of Almanarre is not too far behind, a strong sailor who also qualified for the finals in the second elimination. Slovenian Jan Kosmina the defending European Champion is a competitor you can’t forget among the youths. With his consistent performance he is one to keep an eye on during the next racing day.

Masters: Great battles between the Spanish sailor Alejandro Alcazar Rodriguez, Markus Poltenstein from Austria and the strong Turk Erkan Morgan – all of them showed great board speeds on the race course today.
Elimination 2 was scheduled in the afternoon with unstable winds from14 to 18 knots, every now and then the wind would increase and conditions allowed most rounds for the Juniors, Youths and Masters to be completed up to heat 5 and 6 (until 7.45pm). The finals are scheduled for tomorrow morning for the Juniors, Youths and Masters.
The females were released for the afternoon after completing 2 eliminations.

Competition runs from 29th April until 3rd May. Stay tuned! 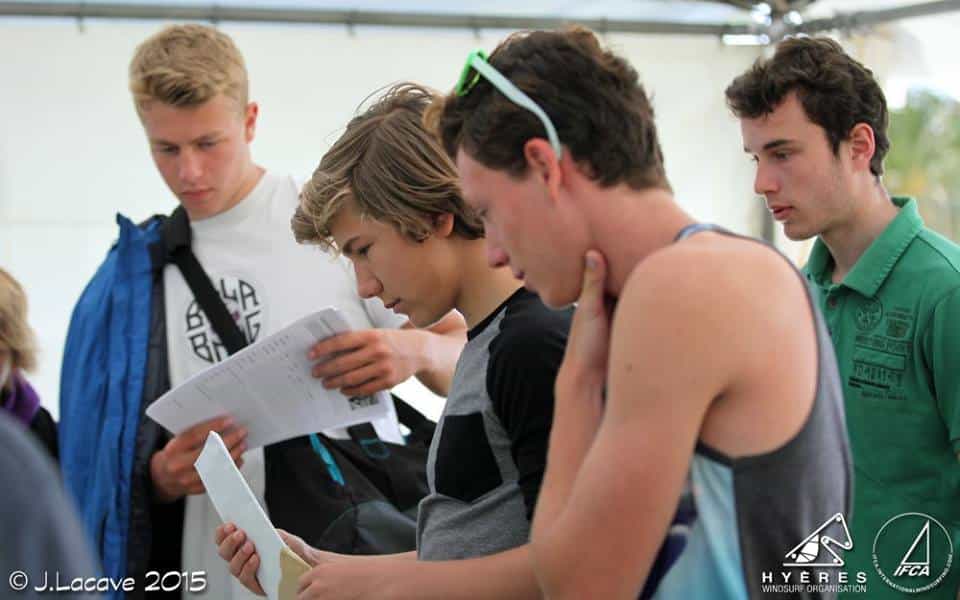 A beautiful sun shining “French spring weather” welcomed the competitors here in Hyeres, Almanarre. Inscriptions took place from 10am to 5pm. After lunch time a practice race was organized by the race committee so the youngsters could have a chance to get used to the starting procedures and the sailing conditions here in Almanarre.

The official opening ceremony took place at 7pm, welcome words were spoken by the organizer of the event Fabien Arnoux, the IFCA Class Representative Eric Kling and Francis Roux (1st Councillor of the Major of Hyeres), Nathalie Peberel from the French Sailing Federation and Councillor for sailing activities. These people promote funboard windsurfing and other sailing activities for Olympic games. The city of Hyeres hopes to be the sailing city partner of Paris in 2024.

Tomorrow the first skippers meeting of the first racing day is scheduled at 10am.
Competition runs from 29th April until 3rd May.  Stay tuned! 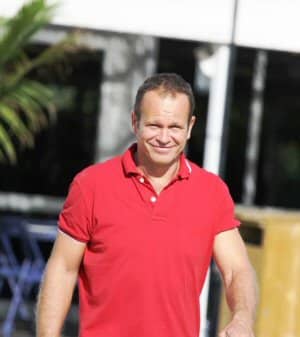 is a windsurfer who has for a long time enjoyed the fabulous spot of Almanarre beach.  Hyeres Windsurf Organisation is one of the oldest windsurfing clubs in France.  Almanarre and its club have produced some well known champions in the past and will try to do it again.
“Now my pleasure is to let others enjoy windsurfing during the competitions we have organized.”  As president for two years Fabien started by organizing local competitions,  followed by national events and now the upcoming IFCA Slalom European Championships.
The Idea: “Last year when we were in Roses for the Youth & Master World Championships, we discussed with Bruno de Wannemaeker ( IFCA President) our proposition. He liked it, he knows us, he knows Almanarre.”
The Expectations: “The maximum number of countries represented in a maximum number of races run to make a successful European Slalom Championship. For this we need the best windy conditions, and so we have chosen April, the best period.”
You are invited because: “those who already know Hyeres do not need to be persuaded to attend, this invite is for those who have never been here and should definitely come to experience it. Don’t hesitate to join us.
Special thanks to: Local Authorities: Toulon Provence Mediterranee, Provence Alpes Cote d’Azur Region, and the Mayor of Hyeres city for doing his best for nautical activities including windsurfing.
See you on 28th April!  Fabien